Shrinking the Atlantic Ocean – A Case of Transatlantic Superspeed VacTrain

The idea of it was first proposed by Michel Verne in his book in 1888, a son of the famous French science fiction author Jules Verne. But it was not until 60ies when engineering visionaries started to get into the science of building a transatlantic superspeed vac-train (TSV). The idea is spectacular and audacious, as well as unimaginably hard and expensive by today’s capacities and costs.

A TSV train would hover above the track without physically touching it thanks to the magnets, eliminating the rail friction altogether (which limits the train speed). Magnetic levitation train is no longer a science fiction; such train already has been serving a route between city and its airport since 2004. Different from a conventional maglev train, TSV would be moving in a vacuum tunnel submerged and fixed 50 meters above the bottom of Atlantic Ocean (shown on the picture), eliminating another source of friction - air. By eliminating two sources of friction, air and rail track, the train will be able to accelerate up to the speed of 8000 km/h allowing the train to cover a distance of 5000 kilometers between London and New York in just 54 minutes, shrinking the time and space between two continents (it would take 20 minutes to reach the full speed and same time to slow down to make the journey comfortable for passengers. This is the reason why it would take about 54 minutes to travel and not less). 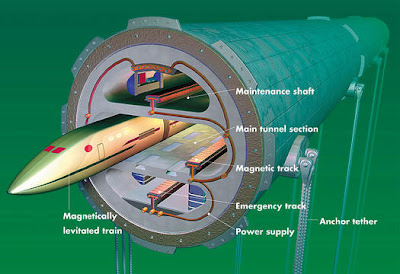 Different sources estimate the cost of project from $175 billion up to staggering $12 trillion making the project unimaginable to be embraced by any current government. For a comparison, average cost of building a 500 km HSR track in is estimated to be around 10 billion EUR (operational costs not included). This number doesn’t even reach the lowest proposed cost of $175 billion. However, as the engineering and material sciences evolve and advance, costs will be pushed down to a point where undertaking such venture might even become possible. In spite of all costs, uncertainties, technical feasibility, risks associated with under water travel (which is way outside of the scope of this article), I think it would still be interesting to look into the socio-economic impacts of such a grandiose undertaking should it one day become a reality.

The Japanese and European experiences show that HSR trains that cover the distances between two cities in less than 2.5 hours can obtain 80-90% of all air traffic and 50% if HSR train covers the distance in less than 4.5 hours. TSV easily meets this requirement. Financial Times in 2009 listed – flight as the third busiest international route with annual number of passengers slightly over 1,6 million. By transporting 80-90% of those passengers, TSV will be one of the busiest train routes on earth.

High Speed Rail (HSR) projects almost never cover their infrastructure and operational costs and are therefore financed by tax payers’ money. Such spending is always justified by the wider social and economic benefits HSRs bring. These are passenger time savings, reduction in congestion, reduction in accidents, reduction in environmental externalities and benefits including the development of the less developed regions. Historically, and have favored HSR projects much less than other European countries, or . However, if such project was ever given a green light by British and American governments, TSV would make impossible possible and have a number of wide scale social and economic effects on two cities.

A study on ’s InterCity 125/225, a HSR network, has shown that towns that became reachable from within 1 and 2 hours, had higher employment rates as well as gross value added per head after the construction of HSR line. Employment increase was highest in knowledge intensive business services and creative industries. Reason for this is the high cost of tacit knowledge exchange in spite of advancement of information and communication technologies. Therefore, and , two hubs of advanced and high value added service industries have very high potential to benefit from a TSV. Cutting a travel time between two cities from 7 hours (by air) to 54 minutes would enable more frequent business meetings, increase working hours of business travelers and as a result increase the productivity of firms. Extent of productivity will also depend on ticket costs, whether every day commuting would be possible, uniting two job markets into one, increasing the size of the labor market pool and enabling workers to move from less productive to more productive jobs between two cities. These two cities as agglomerated as they already are would become even more competitive, with firms having larger markets and enjoying the scale economies. As world’s two financial centers, these cities probably have most in common than any other two cities in different countries. By having similar physical size and economies, as well as identical intellectual resources and endowments, these two cities could benefit from a shared and united market most. On the negative side, as the output of these two cities would increase, so would the congestion and office rents, which already pose enormous problems to  respective city officials.

As history has already shown, often impossible can quickly become possible. So who knows maybe one day it will really be possible to have lunch on and still make it to for an evening theatre performance.
Posted by Shota Gvaramadze at 6:49 AM